When I ask Michael to define what he does, he says that he’s not sure what to call his “profession.” 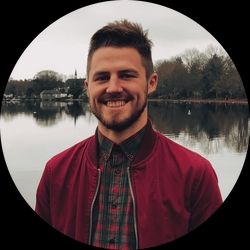 I came across an individual who figured out how to start a successful business from zero multiple times.

No resources, no capital, no investors.

His name is Michael Sherman, a Long Island native. He launched his latest business LetterDash in July 2018. One year later, he says his business is on track to pull in over $100,000 in revenue in July 2019.

Previously, he started a handful of other businesses, including Qualified Impressions, which reached $2M per year before decline, Penalty Be Gone, $500,000 before decline, and Great Agencies, $100,000 per year.

I was intrigued to know what his process looks like: what, exactly, does he do to build these companies?

So I reached out, and picked his brain over a chat. Here’s what he said.

When I ask Michael to define what he does, he says that he’s not sure what to call his “profession.”

His résumé of jobs is varied. In no particular order, he has done door-to-door sales selling vacuums, worked at Home Depot and McDonalds, became a licensed investment banker, tried his hand at computer tech, and even became a licensed bartender.

His education is no different. Michael transferred in and out of a total of five different universities before finally graduating, and that was all after dropping out of high school.

Nothing gave him the excitement or passion he craved. So he took a different path — entrepreneurship — and never looked back.

Each business Michael built achieved a healthy profit — and he did that with nothing more than his brain, a laptop, and a couple of Google Ads coupons.

His latest company, LetterDash, an on-demand legal letter sending service, just turned one year old. Michael shared some of the financial figures from the year so far —

But Michael has gained far more than just money from LetterDash. The experience has been full of learning, and below he shares the lessons you can learn from his journey.

When he started LetterDash, he didn’t need or want to raise capital. He explained that raising capital only adds layers of complications and pressure.

And this pressure can lead to bad decisions, he warns.

In the end, he started the business with a bank account of zero, no framework, and no plan.

There was nothing but an idea. He says that all you need in the early days is the commitment to grow from there.

Michael learned this lesson the hard way. He invested heavily in building software applications for previous companies and all of the businesses failed miserably.

He had learned that the software produced was never the problem. The problem was that he had focused solely on his vision and on how it would be executed, before figuring out who the software was for.

In the case of LetterDash, he says that the software they would have developed would have automated the interactions between the client, LetterDash, and the attorney.

But now that the company is up and running, he sees that it would have been completely useless, and was able to dedicate resources elsewhere.

Getting to a million is never easy. It might be easy for the Elon Musks of the world, those with deep connections and vast resources, who can spend millions in advertising and infrastructure.

For all the Michael Shermans out there, it’s easier said than done.

He said his approach to building LetterDash was boring and straightforward.

“We spent about 15 minutes of keyword research using the Google Ads Keyword Tool. There was enough search volume being reported to warrant the green light and test the idea. We came up with a business name, found a cheap .co domain and threw up a very basic, yet credible looking website.”

This is a point worth emphasizing. The purpose of the website is to generate leads and validate demand. If both of these are ticked, there is scope to build bigger down the line.

“We spent about $100 on web development. We found a Google Ads coupon, I believe it was $100 free for spending $25, we put together a barebones ad campaign and started sending traffic to the site. Twenty-four hours later, we received our first client request. A week later, we had a dozen requests.”

This was the indicator he was looking for, and he was now ready to hire some attorneys and begin scaling.

4. You Need to Obsessively Tweak

“There wasn’t a single action or moment that led to success or the $1M in revenue. I’d say there might have literally been a million little tweaks and ideas tested along the way.”

Michael says that as they received customer feedback, they began to analyze the success of the letters being sent out by one attorney to another. As they went through responses to the attorneys’ letters, they continuously tested new
ideas.

“We’re constantly tweaking and optimizing the letterheads, the shipping method, the packaging, the presentation, even the language used by the attorneys in the letters.”

That same customer feedback led to the formulation of new products and ancillary services that significantly boosted company revenue, without having to worry about new user acquisition costs.

“Listening to the customers, what they want and what they need after the primary service was delivered has been key.”

Customers are everything. Their feedback and word of mouth are critical to expanding your client base, and in being able to improve and expand your service.

With LetterDash, customer service has played a major role in the growth of the company.

“The many 18 hour workdays and time we spent focusing on each tiny thing to make sure the customer was blown away by the service have all been a major factor in our explosive growth and ability to reach that $1M milestone,” says Michael.

The biggest lesson here is to focus on customers’ feedback and to use it to improve your service. You must always be focused on making sure every customer is a satisfied one, even when in reality that likely cannot be achieved.

“My Advice Is Nothing Unique”

You might have noticed that the advice Michael offers is nothing unique. You’ve likely seen a lot of it before. And that’s exactly the point. As he said himself, it’s boring and straightforward.

But this means it’s replicable. It’s a process that anyone can follow to achieve similar successes.

The key takeaway here for entrepreneurs is this: Don’t focus or obsess on anything other than validating demand for your product or solution. In the end, nothing else matters if you don’t have a market.