Tension With a Colleague Becoming Problematic? 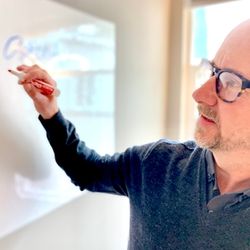 What do you do when you find yourself perpetually at odds with a key colleague? You feel like you’re working at cross purposes. Interactions that should be easy are hard. The chemistry is off. You’re confident they would rather not work with you at all. You admit the feeling is mutual.

You could practice false harmony, but rarely is it good for teams or the work they are assigned. Your teams know that the tension is there — you’re not hiding it. But they see your attempts to hide it and behave accordingly, particularly if the two of you are in leadership.

As people walk on eggshells, team culture and even garden-variety workflows begin to subtly contort to accommodate the behavior. By and by, the team finds itself working in ways that are inefficient or even bizarre.

Thankfully you don’t have to yell curse words or, conversely, to grin and bear it in a powerless state. There is another way, a better way. That is to simply deal with it. Here’s how.

1. Know if your conflict is actually unhealthy.

When a person preditably disagrees with your views, it’s easy to get the idea that they’re out to get you. But watch the signs carefully. Do they otherwise treat you with courtesy, respect and transparency? Disagreement is a natural part of working through complex topics.

Give your colleague the freedom to disagree with you as often or as passionately as they want! Everyone benefits from seeing all sides argued. If the disagreement is brought directly to you rather than behind your back, and presented respectfully and impersonally, without anger or resentment, let that be good enough. Or try being glad that person is around to keep you on your toes and make you better.

2. Skip feeling sorry for yourself.

When you get the idea that you’re being genuinely mistreated, adrenaline and cortisol surge, and rational thinking goes right out the window. Let’s say your antagonist says something off-putting. You turn it over and over in your mind and get increasingly heated. You itemize all the ways they’ve wronged you — every word they’ve uttered, however benign, is contorted to support your hypothesis. It feels good to line up and stroke all the evidence of their awfulness, doesn’t it?

Now, take a few deep breaths. And stop. Rare are the instances in professional and business life when the tango doesn’t involve two people. Give self-pity a whirl if you absolutely must. Even those of us in executive positions are tempted. But better to skip it and move to #3 below.

I know, I know. It’s not you. It’s them! Yet … let’s be honest. It’s probabably both of you. What might you be doing that’s contributing to the dynamic between you and your antagonist? Maybe you have a habit of cutting them off when they’re speaking. Or you don’t reply to select emails.

Or sometimes, when you think no one is looking, you fail to cover your mouth when you cough, and it drives them crazy.

Or maybe you don’t make quite enough effort to accommodate them. Perhaps even though you know that they think and move quickly, you ask them to endure long stories. Or you disregard their preference to hear arguments based in numbers.

Whatever it is, it’s quite likely that you’re making your contributions to the tension. Maybe not in a 50–50 way, but enough to be meaningful. That doesn’t make you wrong, or certainly not bad. It just … is. So, own it. It’ll make it much easier to find a way out of the smoldering tension.

One of my earliest career mentors existed in a state of alert. She was pretty certain that everyone was up to no good, and it was up to her to detect it and throw the first punch. It suited the competitive industry in which she operated. No one wanted to cross her. No one wanted to be around her for long, either. For years, I mirrored what I learned. Turns out it’s rough on the stomach lining and the people around you. It’s heavy.

Then I discovered the power of assuming positive intent. It liberated me. I opt first to believe that colleagues and peers have hearts that are in the right place and full of integrity. I believe that their intent is good, even if I don’t regularly receive tangible proof. In my unscientific experience, assuming positive intent can reduce the tension in most conflict situations by half or maybe even 75%. It’s remarkable.

Every once in awhile, the assumption of positive intent turns out misplaced. In those instances, the fact that you exist in a way that’s less on edge (because you’re assuming positive intent) renders you clear-headed enough to act with wisdom.

We’re all adults here. So talk to the person. Don’t let the unresolved unhealthy conflict fester, spread or infect your teams. You two can work it out.

But there’s a reason this is fifth on this list. Your talk will go way better if you do the above four things first. Be ready to acknowledge that the other person need not agree with you in order to respect you. Let go of the idea that you, a strong and accomplished person, are a hapless sufferer. Acknowledge that you’re not perfect and that there things you do that grate on others. And give the person the benefit of the doubt.

When you’re certain you can do all of that, you’re ready. And you’re ready even if the other person is defensive or seems less than eager to meet you half way.

And try not to surprise your antagonist with the talk. Give them a preview of your hoped-for conversation and ask them if they can get on board with the idea. Tell them forthrightly that, in anticipation of the conversation, you’ll be working on being unguarded, reasonable, and eager to own your contributions to the tension you feel. Approach it this way, and they’ll be open, almost guaranteed.

In the unlikely but not impossible event that you are, in fact, being mistreated, undermined or manipulated by a colleague, and the above techniques don’t work, yet what’s happening doesn’t qualify to you as reportable to HR, then stand up for yourself. Find an opportunity to tell the person the behaviors that you will and will not tolerate from them. It’s important that you not lose your cool, shout, or swear.

Or say anything that would reflect badly on you if your words are repeated verbatim. Just calmly, assertively show them that you’re fearless enough to call them out and stand your ground.

My spouse, wise and scrappy, says, “People will treat you exactly as you give them permission.” My experience backs it up. Four or five times in my career, when all else failed, I stood down someone who was treating me poorly. I confess I didn’t always follow all the rules of decorum I just ticked off, particularly earlier in my career. Yet in every instance, the antagonist knocked it off. I would do it again if I had to … just more calmly and less like a scared cornered dog.

Thankfully, in my experience, such instances are the exception. More common is you find yourself crossways with a colleague who likely is just another smart person doing the very best they can. In that instance, the above five pointers will help you both land that plane together.

Certified Executive Coach. I work with CEOs of company up to $500M to help them get the most of their human capital and to lead change.