I Want To Be Remembered By My Descendants Forever 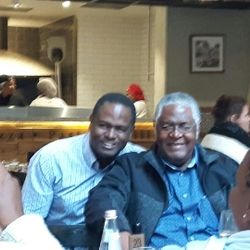 How often do you contemplate the legacy of those you a leaving behind? I’m not talking about greatness like Nelson Mandela or Gandhi. This is not about being known by the world for outstandingness. Yes, I made it up.

I’m talking about being remembered by your family tree well beyond 3 generations after your death.

My great-grandfather, John Knox Bokwe, was a well-known composer/musician/journalist/educator/pastor. His Wikipedia page lists the names of my maternal great-great-grandparents. That’s good to know but no stories about them were ever told to me by my Mom or Grandmother. John Knox Bokwe, however, was mentioned many times.

ZK Matthews, my maternal grandfather, was also a prominent educator, political activist, and lawyer in South Africa. He lectured at Fort Hare University where one of his students was Nelson Mandela. He was also one of the architects of the South African Freedom Charter, a document used today in a free South Africa.

His wife, Frieda Matthews, was the first African woman to earn a degree from a South African institution. I lived with her until I was 10 years old so she was well known to me and her death hit me hard.

My paternal grandfather was a Methodist pastor. Though not known countrywide, he was well regarded in his community. This is highlighted by naming the street where he and the family lived after him.

I have no names of any of my ancestors before him and there are no Wikipedia pages to assist in this endeavor.

My parents returned to South Africa in 1995. They left there as refugees in the early 60s and wed in 1964. My dad rose to prominence in the presidency of Thabo Mbeki, the 2nd president of South Africa.

Here’s my full tree as I know it:

We are six generations deep including John Knox Bokwe to Dakota Nagel.

John Knox Bokwe is Dakota Nagel’s great-great-great-grandfather. I believe that it would be awesome if Dakota could go five generations back regaling stories of his ancestors and being knowledgeable of all their names.

As you can see, I have thought about this a lot. It is very important to me for a number of reasons:

1. To know who you are you have to know where you came from

It is no accident that many who are adopted seek to find their birth parents. There is a hole in their identity and a desire to know something about their bloodline is strong. When you do know it, it gives you a sense of pride.

Hopefully. Don’t get me wrong. There are some who were adopted by great families and have no desire to seek their biological lineage.

It can give you some answers about why you are the way you are; how you came to live in a particular country; who else was a good artist; who else shared your sense of justice, etc. You may feel compelled to continue a family vocation.

Sharing the family’s stories is a duty of the elders. Not everyone is going to have a Wikipedia page.

2. Our name comes with responsibility.

In my case, depending on where you are in South Africa, the names are respected. If you are in the Eastern Cape, the Bokwe and Matthews names are well known. To be found to be doing something untoward would be to sully the names. This is frowned upon.

I’ve taught my kids about the reputation of the Ngcakani name. It is one of integrity, justice, courage, and faith. To portray these characteristics is to honour the name and our ancestors. In turn, this will make us good citizens in our communities and successful in our pursuits.

3. Being in Canada, my children are far removed from Africa and most things African.

I grew up in Africa. I lived in Botswana until I was 10 years old. We moved to Kenya where I lived until the age of 18. In 1984 we came to Canada where I’ve spent most of my life. Because my formidable years were spent in Africa, Africa is part of me in every way.

My kids not so much. They are Canadian. They were born and grew up here.

Their connection to Africa is me. I didn’t want them to lose that part of their identity. I wanted them to feel African as much as Canadian.

That is why I insisted they had African names. Thankfully my wife didn’t fight me on it.

They are of mixed race. I married a white woman and her relatives, that part of my kid’s identity, namely aunts; uncles; grandparents, and cousins were close and available.

The African part was distant. My relatives are in Botswana and South Africa. To bring it closer I told them family stories. I pulled out an atlas and taught them about those lands. I started to have them memorize the countries and their capitals. Unfortunately, Africa was not part of their Geography or History curriculum so it was all up to me.

One regret is because I am not fluent in any African language, they were not taught one either. Language plays a major part in connecting one to their heritage.

I don’t know if my wife and I will be remembered six generations removed from us. But I’m going to try to make such an impact that our names might comes from their lips now and then. It’s not about me. It’s about them.

I know how I feel when I think about ZK Matthews and John Knox Bokwe and Garnet William Ngcakani. I want them to have that same sense of honour and pride.

I write about family, fatherhood, parenting, and faith. I enjoy giving my opinion on social issues and politics. I love reading and writing fiction as well. I'm also into history. Really nothing is off-limits with me. Bring in on. Also read me at https://www.vuyongcakani.com